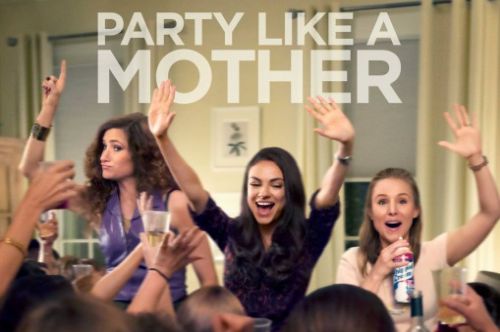 Recently my Facebook feed has been filled with moms excitedly flocking to their nearest movie theatre, taking giddy selfies and eagerly waiting for the lights to dim. Why? Why are moms so excited to kiss their kids good night and scurry for the door? It’s because, for a few brief and glorious hours, one film is giving moms permission to be bad and, it seems it feels pretty good.

Bad Moms. This movie that is slapstick comedy at it’s most crass, containing more swearing than a boatload of sailors could compete with, is also hilariously liberating and undeniably spot-on. Seriously, I can’t remember the last time I laughed this hard.

But cut through the ridiculousness and hilarity and you get to the real truth of the matter– this movie speaks to the very core of today’s moms. It literally pulls back the blinds and opens the can on some very real truths that today’s moms are presented with. I’m not generally one for writing list-based articles, but this is a list that writes itself.

So here we are, Six Truths Bad Moms Has Opened the Can On:

When I was a kid my parents never put me in camps or anything extracurricular, it wasn’t in the budget. But what I did get was freedom to roam the backyard, freedom to spend entire days reading, and freedom to construct any project my imagination brought forth. This experience made me the writer and crafter I am today. My husband grew up in a small coastal village with only one channel on the television. Although he did have some extracurricular pursuits, much of his childhood was spent finding ways to fill the hours by his own devices. If he was bored, he alone needed to find ways to change that. If he took to the outdoors, if he took to his books, it was because he had time, freedom, and boredom driving him.

Time, freedom and boredom, three things significantly lacking in the lives of today’s kids. Some parents, I believe, feel they are doing their kids a disservice by not signing up for every different sort of activity. Some parents are so overscheduled themselves that it is easier on them to keep their kids busy. But is it? My family does not respond well to the constant rush of work, activities, meal-planning, and home management. When we feel rushed we are stressed and tired. When my husband and I are stressed and tired, so are our kids. Because it’s not just us rushing around, it’s them too. When sometimes, all they really want to be doing, rather than soccer practice or learning tennis or piano lessons, is playing in our own backyard.

My sister is a primary school teacher, and after too many years spent watching kids get pushed beyond their readiness, she herself adopted the attitude of letting kids be kids. I learned it from her, and I’m totally OK with it. It’s why I don’t agree with hours of homework, in pushing young kids to sit for long spells and concentrate after already sitting for long spells in the classroom. Kids need play, they need time to figure life out on their own, they need to make messes. They also need time to unwind, to allow the day’s stresses to leave their bodies. They don’t need expectations on their accomplishments or to be held to competitive standards. This doesn’t mean allowing our kids to be lazy, but it does mean recognizing that each kid is different, and adjusting how much pressure we as parents must apply. And, it also means saving time for fun!

3) Doing too much for our kids raises the bar on their sense of entitlement.

I’ve had this conversation more times than I can count. I’ll be with another mom and we’ll be talking about our kids, and it often comes back to how entitled today’s kids seem to feel. The conversation usually ends with one of us saying something like, “I would never have spoken like that to my parents when I was a kid!”

A part of the problem is that, in our striving for perfection, we moms have become enablers. I notice it even with my own young kids– as I naturally catered to their every need as babies and toddlers, the expectation was already set that I would continue to meet their every whim without any return effort. I am constantly met with surprise and resistance as they are gradually being made to do things on their own that would previously have been done for them.

Another part of the problem is that it is often simply easier for us moms to do things ourselves rather than wait for our kids to do them. Let’s face it, we’re busy as all heck. There are so many demands on our time, so much that needs to get done in a day. It’s so much easier to just do it and get it over with… except of course, for the expectation it builds in our kids that mom will indeed take care of everything. We end up inadvertently teaching our kids entitlement when they should be learning accountability.

It would be wise to remember that what’s easiest in the short term only screws us in the long run. And also, entitled kids grow into entitled adults, and nobody wants that.

Village. That is all.

5) Who said fun was supposed to end with motherhood?

One thing I’ve noticed, in the attempts at perfection and the judgment and the stress and the actually-I’m-flailing-on-the-inside-ness, is that we take mothering so seriously these days. Everything. Is. So. Serious. All. The. Time. And along with taking motherhood seriously, we ourselves have become serious. So serious. Uptight. High strung. Overall, less fun.

We have a thousand items on our check lists, we have a gazillion things to get done in every day, and we worry a lot about not getting it right 100% of the time. It’s exhausting and it wears us down, and we forget all too easily that we also have lives of our own that need living.

We don’t need to throw a booming drunken house party a la Mila Kunis (I’ve sadly never danced on a table in my entire life), but we can still have fun, laugh, and enjoy a life outside of our kids. And we don’t need to take our jobs as moms quite so seriously either. It’s OK to let go.

6) We all have a secret in the closet just itching to get out.

Perfection doesn’t exist. Although we still kill ourselves trying we all undoubtedly fail every now and then. And we all have something we are ashamed to admit.

My mom was a yeller. I never knew that I would be one too, there wasn’t much indication pre-motherhood. But somewhere along the way– sometime past 8pm when I was exhausted and my kids were refusing to stay in their rooms and I was on my 100th trip up the stairs — the yeller came out. Once out, she was hard to put back in. I try hard. I shove her back into the closet, I push on the door with all my might, usually with little bits still poking out. Yet, every once in a while she returns, often lurking in the darkness late at night.

Here’s the thing, I’m not perfect. But that’s the point, none of us are. Being imperfect doesn’t make us bad moms, it makes us human. Yet even if it did make us bad moms by today’s very high standards, how liberating it would be…. if we could only allow ourselves the freedom to let go and be “bad.”

Which perhaps is a seventh final truth to add to the list: Sometimes being bad is actually very, very good.